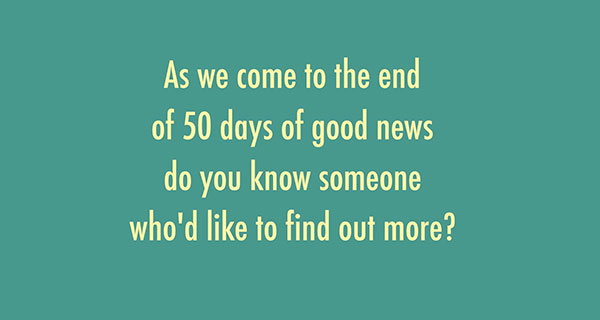 We’re now coming to the end of this year’s 50 days of good news.

In the run up to Easter, we encouraged churches to plan a short course for those interested in exploring faith. For week 7, we’re going to set that challenge again, so that those friends and neighbours who are curious as a result of everything you’ve been doing over the 50 days will have somewhere to explore further. There’s a new 45 second video to explain the challenge to your church:

50 days of good news week 7 from Ruth Whiter on Vimeo.

We’ve picked five resources we know are good for small groups – you may know of others. If you’re wondering how to get started with the people in your neighbourhood, you may like to read the article below about two mums who ran a course designed for prison ministry in their local cafe! This story was shared by one of our churches, although we’ve changed the names involved.

When Naomi’s son started preschool, she hoped that the conversation on the school run would open up so that she could share her faith, but everyone just seemed to talk about the weather. Eventually, inspired by a similar story she’d seen on You Tube, Naomi decided to organize a Christianity Explored course in a nearby café.

She ordered flyers from the Christianity Explored website and asked the primary school if they could be placed in children’s book bags. Amazingly, the school said yes.

“That was quite scary, if I’m honest” Naomi admits. “You’re putting it out there that you’re a Christian, and that anyone can come and ask you questions. I know some people’s attitudes towards me changed as a result.”

At the first meeting, there was a small group including at least two women with no Christian background – one she knew well, the other she had never met before. Naomi had also asked another mum from church to come along as a kind of ‘wing man’ – who insisted that she didn’t want to do the talking.

Like the Alpha course, Christianity Explored normally makes use of video, but that wasn’t going to work in a café setting, and would also make the sessions too long (to begin with, the group had an extra helper to keep small children occupied at a separate table in the café). To get round this, Naomi decided to use a special version of the course designed for prison ministry!

“It’s actually really good because it doesn’t use any Christian jargon. I didn’t mention that I was using the prison version the first week, but for the second week I printed off a sheet without noticing that it referred to ‘when you went back to your cell’! I just had to explain it to them, and in fact it was a bit of an icebreaker.”

The group adapted to the needs of its members, moving to another morning when there would be no need for the ‘crèche’, and then, after the 8 week Christianity Explored course, moving on to a UCCF resource called Uncovered, which took them through the gospel of John.

“I love it when you can let the Bible speak for itself” says Naomi. “Now they were encountering Jesus for themselves, and it was blowing their minds.”

Although the group eventually ‘fizzled out’ as circumstances changed, Naomi still meets with one group member regularly. Her friend Helen, who had been reluctant to speak in that group, now found herself at New Wine praying about what she could do in her own neighbourhood.

Helen heard an answer from God that was so clear and specific, she went home and “just did it!” She asked the church to print 100 Christianity Explored postcards, and invited everyone in her neighbourhood, plus a neighbour who was a retired minister and his wife, to meet in her home. “I was very nervous” she admits, “you just have no idea! I am that person who thinks ‘I’m never going to be good enough’”

In the end there was just one ‘not yet Christian’ in the small group that formed, but Helen found she could trust God for everything about the course – from the number who turned up, to the number of teas and cakes needed, because she had no doubt that God had called her to do this.

Like Naomi’s group, they are now continuing to grow in discipleship by using the UCCF Uncovered material. And similarly, Helen has been enjoyed seeing what happens when you open the Bible and allow it to speak to people.

“God puts an idea in your head and lets it sit there for a little while” says Naomi. “But there’s still that act of obedience required, where you step outside of your comfort zone.”

The full list of links to the recommended resources is here: